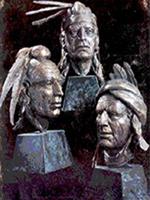 Native American Heritage
The City of Anderson is named for Chief William Anderson, whose mother was a Delaware (Lenape) Indian and whose father was of Swedish descent. Chief Anderson's Indian name was Kikthawenund, meaning "making a noise" or "causing to crack" and is spelled in a variety of ways.

The settlers coming into Anderson referred to the village as "Anderson Town." The Moravian Missionaries called it "The Heathen Town Four Miles Away." Later it was known as "Andersontown." In 1844, the name was shortened by the Indiana legislature to "Anderson."

Industrial Boom
Between 1853 and the late 1800s, 20 industries of various sizes located here. On March 31, 1887 natural gas was discovered in Anderson. With this discovery several industries, notably those in glass manufacturing, rushed to locate here. Cheap and plentiful natural gas led to a population explosion. Other companies that could benefit from the increased economic activity in Anderson soon began to relocate here.

In 1912, the natural gas ran out. Several factories left and the local economy slowed. The Commercial Club, formed November 18, 1905, was the forerunner of the present-day Chamber of Commerce. This club persuaded the Remy Brothers to stay in Anderson and encouraged other entrepreneurs to locate here. For decades, Delco Remy and Guide Lamp, later to become Fisher Guide, were the top two employers in the city.

Demographics
Today, Anderson continues to thrive on its manufacturing heritage while at the same time diversifying its economic base by actively recruiting new companies in various industries. Today, Anderson has a rich multicultural quality of life and low cost of living.  According to the 2010 U.S. Census, Anderson has a population of 56,129. The altitude of the city is 884 feet. The latitude is 40° 6' 27" N and the longitude is 85° 40' 43" W. The City of Anderson is located in parts of four townships: Anderson, Union, Richland, and Lafayette.